In addition to the parish magazines listed on the previous page, we also have records of earlier magazines, with two consistent runs from 1911 to 1920 and 1934 to 1965. These are too delicate to be scanned without the proper tools, however, viewing can be arranged by contacting us.

We have been able to scan the various styles of front pages which were used on the magazines; these are detailed below along with information on how long that page was used.

Some of the runs may have started earlier or finished later than the copies we have on file – if you have any information regarding this please do let us know.

The magazines appear to have been produced monthly, then all issues for a year were bound into a cover featuring general service times and a photo of St Bart’s. Inside were details of the services for that month, as well as updates from the various organisations based in the church. 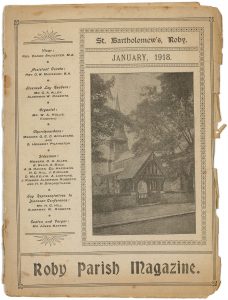 This cover existed for at least the years stated above, although could’ve lasted longer too – we do not have the issues to verify it. 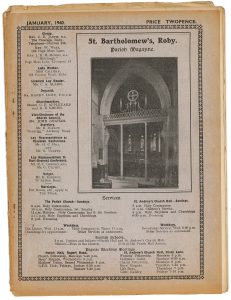 This style of cover featuring the Chancel & Screen may have existed prior to 1934, but was discontinued in 1941. 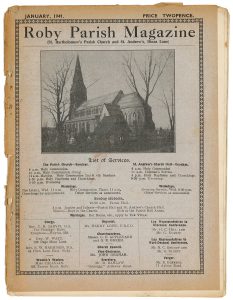 This did not have a long life, perhaps due to the original block for the photo of St Bart’s on the front being lost in an air raid. The next four years were without a photograph whilst a suitable replacement was found. 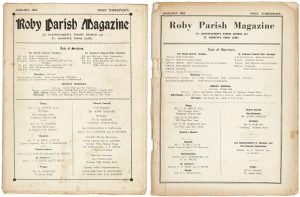 Cover Style 4: 1942-1944
As mentioned above, these years were without a photograph on the front cover as it was lost in an air raid. The April 1944 issue thanks a Mr H. V. Clark of “Ryburn” for the pencil sketch which was used to make a new block from, and was subsequently used from 1945. 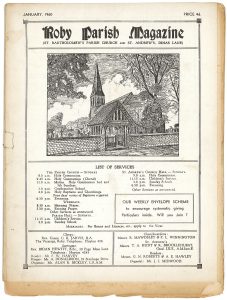 Unlike previous front pages, this one featured a sketch rather than a photograph and was perhaps the longest running of the styles. 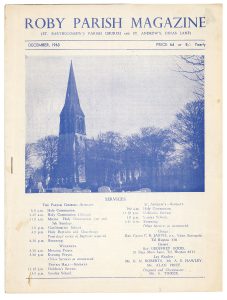 The magazine covers then took on a blue ‘tinge’ as the colour of the ink was changed, along with the photograph. This series ran until at least 1965, although was replaced by the Spire magazine at some point.

Theme by Anders Norén — Up ↑